Gennady Golovkin will be attempting to get one of his old world titles back, the IBF portion of the championship, when he takes on Sergiy Derevyanchenko for the vacant belt on October 5th at Madison Square Garden in New York.

It will be the type of big occasion that Golovkin has seen many times in his career at this point, but only once for the Ukrainian. Derevyanchenko was unfortunate to come away with a points loss, his sole defeat, to Daniel Jacobs last year in a fight where he made the American work hard for his opportunity to fight Saul Alvarez in May. 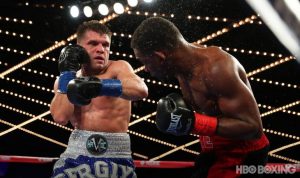 Derevyanchenko will have gained a lot of experience fighting one of the top names of the division. That also happened to be contested for the IBF crown.

Although he only has fought 14 times professionally so far, Sergiy won a bronze medal as an amateur boxer and impressed when fighting in the World Series of Boxing tournament between 2010 and 2014. He won 23 of his 24 contests. He made his professional debut in 2014 and wiped out Sam Soliman, a former world champion, in 2 rounds. After taking care of Toreano Johnson, breaking him down and stopping him in 12 rounds he dealt with Dashon Johnson before taking on Jacobs. In what was an IBF eliminator, Derevyanchenko overcame Jack Culcay but failed to successfully negotiate terms about a fight with Saul Alvarez. It was shortly after this point that the IBF stripped Alvarez for failing to defend against his mandatory challenger.

And now Sergiy gets a second opportunity! Maybe you’re wondering what he brings to the table in terms of his strengths and weaknesses. Well, what he likes to do will surely please the majority of fans.

The bronze amateur medalist likes to come forward, however, he is not too comfortable fighting on the inside. Instead, he tends to want to fight at long range with long arm punches but will throw a barrage of punches if he has his opponents trapped. His head movement is adequate but not exceptional. And he can be forced to exchange which might play in the hands of a power puncher like Gennady Golovkin.

We all know what we are getting with the Kazakhstan boxer by now, but let me reiterate.

Golovkin is fine boxing at close quarters and throws big hooks to the body. Upper body defense never used to be a strength of his, but under new trainer Johnathon Banks I saw some of that in his last fight against Steve Rolls although I would like to see more. He stands his ground well and both of his fists are hazardous and can take anybody out at any time. 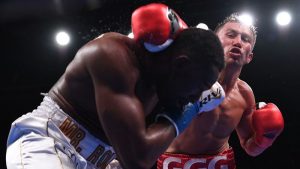 I see this championship fight being a rousing one. Neither combatant likes to yield and will keep throwing leather until one of them drops. Some of Derevyanchenko’s head movement may frustrate Golovkin early on, but I do not see it as being something that will be a sustaining problem. As long as Gennady forces Derevyanchenko to keep fighting without giving him much of a rest, especially at close range, then eventually his power will break him down and overwhelm him in about 8 rounds.

But in no way can Golovkin sleep on this fight. It still remains a highly dangerous one if Golovkin is looking past Sergiy. But if he does come through with a victory then maybe Canelo Alvarez will be tempted to come back down to middleweight once again for a trilogy finale after, and if his clash with Sergey Kovalev comes off.

That is, after all, what the fans really want.