The Staples Center in Los Angeles has the potential to see a genuine welterweight classic next weekend when Shawn Porter puts his WBC crown on the line with Errol Spence Jr’s IBF portion in order to decide who should rightfully own both. The fight will be broadcast on Fox PPV in the United States and live on SKY Sports in Great Britain, with ring walks commencing probably around 4am in the latter country.

Although both fighters have been on good form as of late, Spence, a southpaw, is yet to taste defeat in a 25 fight career. 21 of his wins have been by knockout. He came through his acid test to Kell Brook in 2017 and has since gone on to show that it will take a special talent to overthrow him right now after dominating wins over such major names as Mikey Garcia and Lamont Peterson. Does Porter have what it takes to achieve what nobody else has done before?

Let’s delve into it.

Porter, 31 years old, is on a four victory streak since losing to Keith Thurman on points in 2016 and captured the WBC title by inflicting the second defeat on Danny Garcia’s record in a fight in which the Las Vegas resident resorted to using pure technical ability rather than his trademark wildly thrown power punches. However, he reverted to type in his first defense against Yordenis Ugas. The challenger was able to catch Porter as he made his way forward and also took the opportunity to land quick counters in close range. Porter managed to remain champion by a split decision. 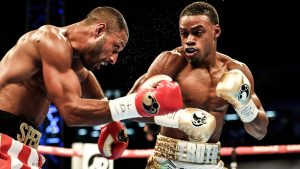 Errol Spence showed he was the real deal against Kell Brook.

While Mikey Garcia and Lamont Peterson are no pushovers, Shawn Porter will surely be Errol Spence’s toughest opponent since Englishman Brook. Still only 29, Spence mixes it adeptly to the head and body and has a sufficient southpaw jab. He moves well although he elects to usually stand toe to toe. Sometimes he can leave his chin exposed when he lets his combinations go. But nobody has found a way to benefit from that at this time.

Porter, on the other hand, often prefers to use brute force and will in order to have his hand raised at the end. Fighting with a crowd pleasing combative style, the WBC holder has a high work rate and opts for launching big hooks and uppercuts anywhere he can score with them. This tends to make him a little too reckless as he can miss a fair number of them. This mistake can be costly because that leaves him open to counter punches, as Adrien Broner and Yordenis Ugas were able to show. 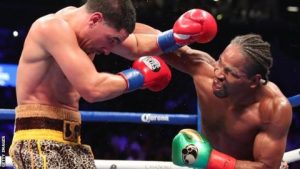 Shawn Porter impressed the judges with his boxing ability on the night he beat Danny Garcia.

Although most eyes are still waiting for the big one to happen in Errol Spence v Terence Crawford, it is hard to imagine that Spence v Porter will fail to ignite at some point. Both guys are not shy to fight up close which is good news for viewing audiences. You should expect a high octane battle of skill v will where Porter will assert his physical prowess while Spence uses his boxing brain to hit Porter where it will hurt the most.

I anticipate that Saturday’s match will be a modern classic, although I am not totally sure of what magnitude. I also think that Errol Spence Jr will be the one that comes out on top after a hard fought contest that may see him more marked up than he usually is. Porter will do everything he can to make it uncomfortable for his opponent. But history has evidently shown that skill beats brawn more times than not.

The superior ring intelligence of Spence will be the key in this one and he will win by a unanimous decision.