It has now been over two years since Floyd Mayweather last gloved up for the professional ring when he fought UFC superstar Conor McGregor. The Irishman, for all of his acuity as a cage fighter, soon found out that boxing is a very different combat sport altogether. Facing Mayweather, one of the most athletically gifted boxer of the modern era, further emphasised that. The American found the answer to end things in the 10th round. His record, to this day, stands at 50-0 with 27 KO’s.

Will he box again? I think it is unlikely, to be honest with you. Floyd is now 42 years old and seems happy being the president of Mayweather Promotions. The company doesn’t contain the most loaded of stables. Perhaps the most famous name under contract right now is super-featherweight WBA champion Gervonta Davis. However, it is expected to grow given time. 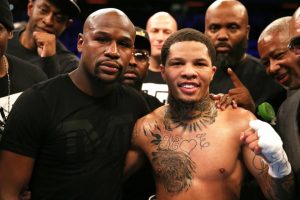 Floyd Mayweather seems content to stay in boxing from outside the ropes these days.

The man who labels himself as “TBE” (The Best Ever) once stated that when he retired he would reveal to everybody how he was able to overcome every single opponent that he ever faced.

He is still yet to do that. So, this article is going to give that a shot.

Let’s start by saying that Floyd Mayweather’s boxing style wasn’t everybody’s “cup of tea.” It is more designed for the boxing purist who appreciates the technicalities of fighting and defensive techniques. And not to mention that the combative talent of the Las Vegas resident was so high that he was able to make most of his fights look like sparring sessions. He was a victim of his own aptitude. That is probably the reason why he had to hype up and make his matches like huge events to a high degree. Obviously money was a factor. But I find it hard to believe that if Mayweather was not as brash on camera as he was then he would not have been as renowned as he is now.

With all that said now, let’s start by exploring those faculties.

Mayweather’s main gift here was his uncanny intuitive ability to sense when his opponents were going to throw punches, and specifically which ones. He was always ready to use the appropriate defensive maneuvres and mastered the craft of “sticking and moving.” I have seen people often state that he ran. This is evidently not true if you watch his fights. The five weight champion stood at close range many times with his front foot stationary, but he utilised upper body movement and footwork to their fullest effect.

Another factor is awareness. Mayweather was always aware of where he specifically was situated in the ring. Even during moments where he had his back against the ropes and in corners, he was always there with a purpose in mind. Going back to mobility, he would use a lot of lateral movement to evade being hit from hooks which often contributed to depleting the endurance of his opponents.

Floyd was a masterful counter puncher. He always set the range between him and his foes correctly, and because of his intuitive ability to detect when they were going to throw, and specifically what, Mayweather was able to make them pay for their mistakes to the fullest degree by hitting back with the finest selection of punches.

However, it was also this terrific counter punching ability that was mainly responsible for making Floyd believe that he had no reason to have a blood and guts war with anybody. He would often hit with just one or maybe two counter punches and then take his foot off the gas. And he was perfectly content with repeating this for 12 rounds, which contributed heavily to opinions that he was mundane to watch.

Footwork was previously mentioned before in the “Defense” section of this article but it would be remiss to not expand on it.

A lot of people think about moving out of range to avoid punches when it comes to mentioning footwork. But it’s not just about that. Mayweather was great at circling his opponents and knew where to position his feet so he could then get ready to dart in another direction and make the opposition hit nothing but air. Of course, he also made the best of pivoting.

The former welterweight champion fortunately didn’t have to rely on his punch resistance too much during his 50 fight career. But he answered the question about whether he could take a punch during matches with the likes of Zab Judah, Shane Mosley and Marcos Maidana.

In fairness, Judah looked to have floored him with a right hand in the 4th round of their contest which the referee never saw. But even if it was called, it would have been a flash knockdown anyway since Floyd merely touched the canvas with his glove and wasn’t hurt at all.

It is well known that Mayweather was always in the gym in between fights, staying in shape and eating all the right things. He did not allow his weight to balloon when taking a rest like many other boxers have done and still do. So, his great endurance when fighting is largely due to this.

But, fact that he relied heavily on counter punching and only threw a couple at a time while allowing his opponents to lead and waste energy by missing most of their output helped Floyd to retain most of his spirit. He never went to war and made things difficult for himself which, no doubt, would have seen him more marked up and worn out than he often actually was.

Knowing which punches to connect with and landing a good percentage of them was another reason why.

What makes a boxer great is his ability to adapt to any tactics that the opposition is employing. It is always a good idea to have a plan B or even a C. A lot of fighters change their tactics during the one minute rest periods. Their trainers tell them that a particular thing isn’t working out so well so they then tell them to switch up.

But Mayweather could do that mid-fight at any point when he chose to. A true student of the sport, Floyd was adept at thinking through what he should be doing.

It has been said that boxing is 80% mental and 20% physical. And I believe that.

DiBella Entertainment’s acclaimed Broadway Boxing series returns to Brooklyn
Yves Ngabu believes that he will have too much in his arsenal for his latest challenger Lawrence Okolie
Read more articles about: Floyd Mayweather, Marcos Maidana, Shane Mosley, Zab Judah