On November 2nd, Saul Alvarez will be attempting to become a three weight world champion when he will face the formidable puncher Sergey Kovalev for the WBO portion of the light-heavyweight championship. The contest will be staged at the MGM Grand in Las Vegas and will stream live on DAZN. UK viewers will be able to watch on PPV on SKY television for £19.95.

It is a big ask for the Mexican, who is coming off wins over Daniel Jacobs and Gennady Golovkin. Kovalev last fought in August when he defended his title against Britain’s Anthony Yarde which he won with a technical knockout in the 11th round. Although his aura of invincibility is long gone, the Ukrainian still packs a punch and also has enough athleticism to still deal with a lot of contenders in the division. 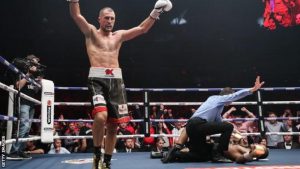 At still only 29, Mexican Alvarez has plenty of time to leave a solid legacy behind him. It can be foreseen that if he did lose in November then people would chalk it down to Kovalev’s size being the main factor and it should not damage his stock all that significantly. Standing at 5’8 he is giving away four inches in height to Kovalev, who is 6’0. He is also two and a half inches shorter in reach. So, the dimensions, especially as far as height, could be a major challenge for him. Add to the fact that there is no rehydration or catchweight stipulation in the contract, who knows what weight Kovalev will be coming into the ring at? I am sure that the light-heavyweight champion will seek every advantage he can get.

Upper body movement has always been one of Alvarez’ strengths and he will surely need to utilise that to it’s fullest effect against Kovalev. When Canelo fought Jacobs back in May, he got in some meaty hits to the body. Andre Ward, especially in his second fight with Kovalev, focused on the body which eventually paid off in the 8th round when the fight was called off with a TKO in favour of the now retired former super-middleweight champion. Might Alvarez try the same tactic? Being the much shorter man, it would be a smart game plan to go for since Kovalev has shown some vulnerability downstairs. 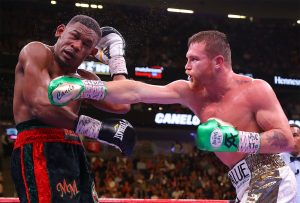 Anthony Yarde had to ship many long arm strikes. Kovalev threw many jabs and straight right hands, but he had to weather the storm in the 8th round when the Brit had him on the run. But he showed his mettle by hanging on and he managed to turn things around three rounds later with the technical stoppage that ended with a single jab on an exhausted Yarde. It is logical to assume that Kovalev will rely on a lot of long arm punches against the much shorter Alvarez. But with Saul being good at slipping and sliding there is also the danger that he will miss a fair amount of them and waste his energy. That might be a chance he will have to take, though.

Because of the dimensional disadvantages of Canelo, it is likely that the fight will play out to be like a tactical chess match. At least that is what the challenger will try to make it. Kovalev will doubtlessly attempt to go for the knockout since that has always been his natural fighting style. And he probably knows that the odds are against him of winning the fight on a points decision in Vegas.

I am not certain, but I will take the middleweight star to grab a distance win. It could very much turn out to be a controversial one after Canelo is hit more times than he has ever been before.

Then that may yet produce the desire for another anticipated rematch along with a third fight with Gennady Golovkin some time down the road.