175lb saw the passing of the baton on Saturday night when Saul Alvarez knocked out Sergey Kovalev in the 11th round for the WBO light-heavyweight crown at the MGM Grand in Las Vegas. The fight was a tactical one that unfortunately did not catch fire for audiences, however, it did conclude with a spectacular knockout that finished with a left hook and a straight right upstairs that saw the Russian almost crash down on his knees and sagging on the ropes.

Even though Kovalev isn’t viewed as one of the more fresher champions of the light-heavyweight class, he is perhaps the most well known of them to American and Mexican audiences. Therefore, it made perfect business sense for the middleweight star to move up to take the bigger man on. Fights with Artur Beterbiev and Dmitry Bivol would be mouth watering contests in their own right. They may possibly take place some time down the road providing that Beterbiev and Bivol boost their profiles a little more. 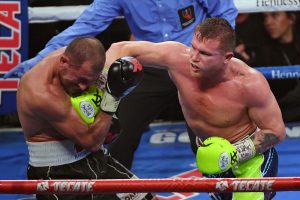 So, what does Canelo do in the mean time?

Would the now 35 year old Andre Ward come out of retirement to be his next challenge?

I would not say it is likely. He currently has plans to tour the UK in 2020 in April. One only has to look back over Alvarez’ record to notice that he has a penchant for boxing in May and September which are months in which Cinco De Mayo and Mexican Independence Day take place. September is a possibility but I would not imagine that May would be. It does not give the American enough time to have a dedicated eight week training camp. And there is the promotional side of things. As it would be a huge event, it is likely that a world press conference tour would be required to make maximum revenue.

Let’s discuss motivation. Andre never really made as much money in boxing that the hugely popular Canelo has. His boxing style failed to captivate audiences. It was even often an uphill struggle to put bums on seats to watch him live! This was most unfortunate because he was a very special talent. I think that, financially, there would be a lot of appeal to try and organise a return to take on boxing’s current cash cow. There is little doubt that Ward would receive a career high pay day. 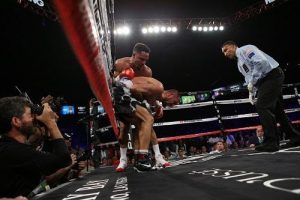 Andre Ward has not seen the inside of a boxing ring since this last fight, a knockout win over Sergey Kovalev in 2017.

In May earlier this year the former super-middleweight king, who has beaten the likes of Carl Froch, Mikkel Kessler and Sergey Kovalev, reiterated that he will not be making a homecoming to the sport. He stated that he was working on other things that are occupying his time. Ward initially left after his rematch with Kovalev in 2017 due to claims that his body could not take the stress of fighting anymore. Whether you believe that is up to you.

With three months to go until he turns 36, “Son of God” does not have much time to think it over, if he is at all. On the assumption that he did make the choice to lace up the gloves once more then it would have to be late next year at the most. Sure, he could do it at 37 but each passing year diminishes his chances of being competitive. Next year will mark three years since Andre retired and there is the danger that ring rust could be an issue, alone, if he jumped straight back into fighting someone at the elite level. So, it’s important not to pile one potential problem on top of others.

Obviously we will have to play a game of wait and see. I would not expect an announcement for Canelo’s next opponent to take place until the first quarter of 2020. Alvarez has stated that it is likely that he will stick to fighting at 175lb which is a smart move. We have seen what happens to the likes of Roy Jones when he stepped back down divisions. They lost. Maybe he will go up to 200lb.

There are a number of possibilities. Personally, I hope Andre Ward will be one of them sooner or later.