Cuban heavyweight Luis Ortiz came up short against WBC holder Deontay Wilder once again in the 7th round at the MGM Grand in Las Vegas on Saturday night. After being soundly outboxed for the first 6 rounds, the American managed to find the one single huge right hand that connected to the southpaw’s head in the 7th that put him on the seat of his pants. Ortiz didn’t manage to beat the count and discovered that his second world title bid ended in failure. He was leading on all three of the judges scorecards at the time of the knockout.

The fight was Wilder’s tenth guarding of the green belt which now puts him in the history books as the man that now equals Muhammad Ali in terms of ten consecutive title defenses. Although the fight with Ortiz was a rematch, and the second time that Wilder has halted him inside the distance, that has not stopped the fans from debating that the champion could possibly be the hardest hitting heavyweight in history. He has knocked out every man that he has beaten. Wilder did go the distance with Bermane Stiverne in 2015 when he won the title, but it looked as if he could have took him out at any point of that fight. In their rematch two years later, he proved he could when he scored a knockout in the 1st round. 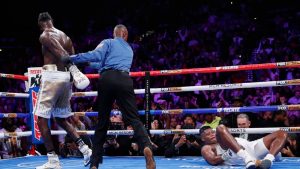 Wilder knocked out Ortiz for the second time.

And now it looks as if Tyson Fury could be next to get another crack at attempting to dethrone the “Bomb Squad.”

The 6’9 Englishman managed to see the final bell with Wilder in their 2018 bout in which many people thought that he did enough to become the new champion. However, the judges saw it differently and a draw was declared which caused major controversy that still rages on to this day. Fury was knocked down in rounds 9 and 12 but managed to get up and finish the whole 12 rounds, to the amazement of viewing audiences.

Ever since then Fury has racked up another two wins in the mean time and even has appeared on a PPV WWE event in a contest against Braun Strowman which took place in Saudi Arabia. It has been mentioned as a possibility that the reason for that was because his two fights with Tom Schwarz and Otto Wallin did not do the type of Pay Per View buying figures that Showtime expected and they felt that they had to resort to alternative ways to boost Fury’s profile in the US. 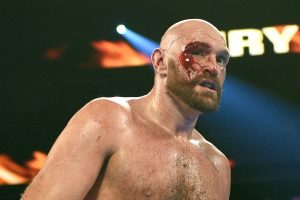 It has been reported that their original fight generated 325,000 which amounted to a possible $24,000,000 in revenue. So, it is understandable that they want to do everything they possibly can so that a rematch between Wilder and Fury meets expectations next time. But they will have to wait and see about that.

As for the rest of us, we should be looking ahead to the second fight and ask ourselves whether Deontay Wilder can do better against Tyson Fury than last time. Most of us are of the opinion that the lineal champion outboxed Wilder during the majority of their original contest. Lateral movement, elusiviness, a good jab and the right range all succeeded against the man from Alabama. Some would say that Deontay received a boxing lesson that night.

But will he have learned from that fight and give Fury a much more difficult time next year?

I do not think it is likely. 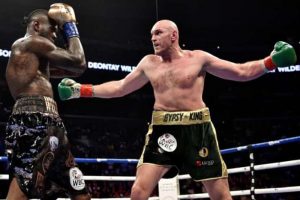 Tyson Fury, for the most part, could do what he pleased against Deontay Wilder in their original fight.
Photo credit: Lionel Hahn/PA Wire

Although Wilder put in an impressive finish against Ortiz last weekend there are still no signs of major improvements in his skill set. He is good at finding the range, which is one of the few reasons why he manages to land so cleanly. But you would be hard pressed to say anything else that is genuinely positive.

That is not to say that Tyson Fury will definitely end Wilder’s reign because the knockout artist has demonstrated time and time again that all he needs is one punch to end it all. Everybody that does battle with him needs to focus for every second of every round until the final bell rings. One split second lapse in concentration can make anybody pay dearly! Even Fury found himself on the floor by him twice before.

In order for Tyson to win their next meeting he will probably need to be sure that he isn’t flat on his back and looking up at the referee taking counts. Because we all know by now that it’s not only the opponent that a boxer faces. It’s also the judges when fighting on foreign soil, so it will be extremely dangerous for him if he experiences any negative 10-8 rounds.

I am not going to be making any solid predictions just yet. I will wait until pen is put to paper and contracts are signed because boxing can be a weird business at times.
The only thing there is to say right now is that both Deontay Wilder and Tyson Fury both could be facing an uphill struggle in the not so distant future.