There will have to be no margin for error for Anthony Joshua when he fights Andy Ruiz in an attempt to reclaim the heavyweight crowns he shockingly lost back in June earlier this year. The fight will be staged in Saudi Arabia and is expected to be a PPV hit in the UK. Audiences in other certain territories can view the fight live on DAZN.

Both boxers appeared to have lost weight in preparation for the rematch. Joshua, especially, looks a lot leaner than he has ever before. But why? Gaining speed and improvements in endurance have been the reasons that most have suspected. The weight loss on Ruiz is a little less noticeable but the reasons for shedding fat on his part are probably due to the same explanations. It is possible that when the English challenger steps on the scales on Friday afternoon he will prove to be the lightest in his career so far. 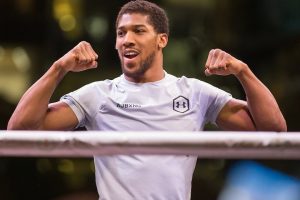 Joshua looks leaner and slimmer than ever before.

But the weight loss aside, what does Anthony need to do to reverse what happened before?

Upon recent viewings of the first fight, the taller man failed to throw the jab with any kind of conviction. At times he would flick them out. And there were moments when he would paw with it. Lowering himself to Ruiz’ height, of 6’2, did not help either. Joshua will need to stand tall and land the jab with authority and high confidence. The Mexican American’s head movement isn’t as competent as it could be so this is something that needs to be capitalised on.

Punch resistance is one attribute that Ruiz comfortably possesses. He can take a punch from the best of them. However, Joshua was still able to knock him down in the 3rd round with a right and left combination. Single punches are unlikely to faze the champion unless Anthony manages to score with a power strike right on the button. That is always a possibility. But remote possibilities should not be relied on. When he has the chance for a clear opening, short and sharp combinations will help to wear Ruiz down. The emphasis here should be on “short.” Joshua should not take risks by working too long otherwise there is the danger that he will get caught with counter punches, which is a tactical favourite of Ruiz. 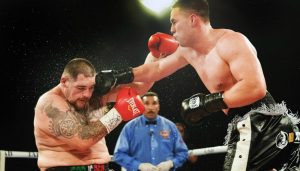 Andy Ruiz is seen here taking punishment from Joseph Parker. But his chin is one of his best attributes.
Photo credit: Photosport

And that brings me to my next point.

That first knockdown that became the beginning of the end for the former champion. A huge left hook from Ruiz to the temple was something that Anthony later admitted he never recovered from as long as the fight lasted. And the main reason he was caught with it was because he got reckless and exchanged with the harder chinned guy. It is common for fighters to put their foot on the gas and try to finish off their opponents once they have them in trouble. But in Joshua’s case, that was a huge mistake. Not taking risks like he did last time and putting on a more clinical performance will be the right adjustment. If the knockout comes then it comes. But it’s imperative that he not force it.

A final point I want to mention is that it was also noticeable that Joshua kept his gloves a little low, especially the left. It all makes me believe that he was simply looking past Andy Ruiz last time to the point where he felt that he could play around with him to his heart’s content up until the first knockdown. Let’s not forget that there was huge talk about a blockbuster clash with Deontay Wilder back then and nobody really believed that Ruiz could actually win. 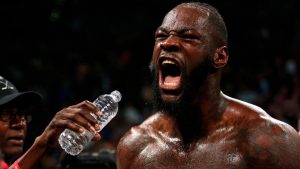 If Anthony Joshua wins on Saturday then might be be right back in the running to face Deontay Wilder again?

It is a case in boxing that we have seen many times before where a champion has looked past a contender to bigger fights ahead and then unexpectedly slips on a banana skin. Ruiz and Joshua will answer some important questions in three days. But it is the Watford man that will be answering the more critical ones.

A single loss can be irrelevant in time if it is later avenged. And most greats of the past have proven that they have the fortitude to not let that end them. In fact, a lot of them went on to achieve even greater things than they had before!

Is Anthony Joshua made of that type of cloth?

We will know by Sunday morning.