It has been five years since Floyd Mayweather was last seen in the ring against a legitimate combatant in Andre Berto and three years since he managed to rack up fifty straight victories on a completely umblemished record. Now 43 years old, it is hard to imagine that “Money” Mayweather will climb through the ropes once again at this point, potential exhibition matches excluded. With various endorsement deals attached as well as managing his promotional company, Mayweather Promotions, it is unlikely that dollar bills will be the focal point as to why Floyd would lace up the gloves again.

With so many debates between fans still raging in regards to how good Floyd really was, this article is going to look back and attempt to answer that as well as gloss over some of his greatest achievements.

Olympic Bronze medalist Floyd Mayweather, then known as “Pretty Boy Floyd,” made his professional debut at 19 years old in the super-featherweight division on October 11th, 1996 against Roberto Apodaca. After scoring a second round TKO and compiling a slew of wins he won his first WBC strap after defeating Genaro Hernandez after forcing him to retire at the end of the 8th round. Eight successful defenses later saw him move up to the lightweight class to take on Jose Luis Castillo for that weight’s WBC version. Although controversial, Mayweather won by a unanimous decision after many thought, and still think to this day, that the Mexican should have kept the title. However, all doubts were put to rest eight months later when Mayweather soundly outboxed Castillo in a return match. 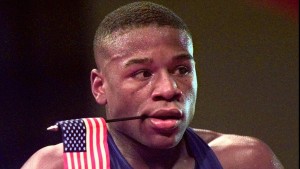 A young Floyd Mayweather before he turned to professional boxing.

Floyd would not hang around at lightweight for long before stepping up further to 140lb, destroying Arturo Gatti in six rounds to win his third WBC crown. In 2006, Zab Judah would be Mayweather’s toughest challenger yet when the two clashed at the Thomas & Mack Center in Las Vegas. Although he struggled to find an answer during the first four rounds, the Brooklyn born boxer soon recognised the difference in class when he was outsmarted over the next eight. However, Floyd was still finding it hard to gain recognition for what he was achieving. This frustration continued into, and past his triumph over Carlos Baldomir to take his fourth WBC title at the 147lb weight limit.

But things were about to change.

Oscar De La Hoya, having fought only once in twenty months but capturing the 154lb WBC belt with a KO over Ricardo Mayorga on May 6th, 2006, would put that on the line against Mayweather. The fight was staged for May 5th, 2007 and it would become the then richest Pay Per View fight in history, amassing $136,853,700. Although De La Hoya managed to get a decent jab working during the early part of the bout, his questionable endurance soon betrayed him and Floyd, who was now known as Floyd “Money” Mayweather, would take the title. 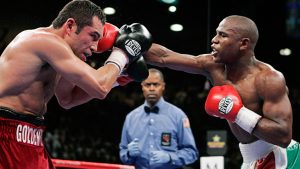 Next up was a huge showdown with Britain’s Ricky Hatton at the MGM Grand Garden. The unbeaten “Hitman” would give it all he had but he would come unstuck in the tenth round, giving Mayweather his first stoppage win in two years. After taking care of business the elusive five weight champion voiced his decision to retire, stating that he had done everything there needed to be.

2009 disagreed, however, when the now 50-0 gladiator returned to fight Juan Manuel Marquez in a pretty dull affair. HBO distributed three more battles involving Mayweather, but in 2013 Floyd signed a groundbreaking deal with Showtime which would air his next six fights starting with a contest with Roberto Guerrero. The fight went as expected and “Money” had few problems. But his next one against Saul “Canelo” Alvarez would be a huge and highly anticipated fight by the fans. It would become a major learning experience for the Mexican as Mayweather showcased his superlative abilities in what would be one of his very finest performances. 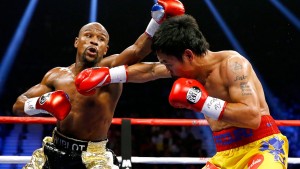 Mayweather v Pacquiao stopped the world back in 2015.

Argentina’s Marcos Maidana was given two chances to dethrone the flamboyant boxing star but he would come up short both times on points. And finally on May 2nd, 2015 the world stopped to watch the fight it had been waiting around six years for when Mayweather took on Manny Pacquiao. Unfortunately the mega blockbuster event would fail to ignite and Floyd won a lopsided unanimous decision. There was one more authentic match with Andre Berto to deal with that year before 2017 saw the cross-over fight with Ireland’s Conor McGregor. Conor was exhausted by the 10th round and was stopped to give Floyd Mayweather a perfectly rounded 50th victory.

Having summed up his career, what are my views on him in retrospect?

There is no doubt in my mind that Mayweather is the best I have ever witnessed in terms of skill set and overall ring intelligence. In 50 fights, the man was hit effectively only a handful number of times. And as he proved in the fight with Shane Mosley he had great powers of recovery as well as a seemingly rock solid chin. You would be hard pressed to find another boxer in history who boxed as flawlessly as Floyd did for the majority of their whole careers. 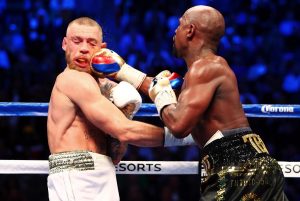 While it took a little while for Mayweather to gain recognition, things really changed for him once he landed the fight with Oscar De La Hoya. A promotional image overhaul was also a big part of that reason. Once he became known as “Money Mayweather” he used that to his advantage by baiting fans by showing off his wealth, which made people want to buy his fights in the hope to see him lose. But it wouldn’t be fair to say that was entirely the reason. Floyd also gained a lot of admirers from about 2007 onward who began to appreciate the Sweet Science of the sport.

Though it is fair to say that there was a degree of frustration on the part of the fans who wanted to see Floyd in with big names like Miguel Cotto. For years he kept people hanging and questions were raised as to how well this man would go down in history as one of the all time greats. Promotional issues with Bob Arum played a major part in that which thankfully came to a successful resolution.

I think the period between 2010-2015 did the most favours for the legacy of Mayweather. Finally fights with Cotto, Manny Pacquiao and Saul Alvarez were setup and executed although the Pacquiao contest probably should have occurred a bit sooner than it did. Alvarez was proven to be still too raw and inexperienced to give Mayweather any sort of real challenge which shows that, just because there is public demand for something, it does not mean a particular product will always live up to expectations. Puerto Rico’s Miguel Cotto gave it a good go, even bloodying Floyd’s nose, but still convincingly lost on the cards.

As time goes by it is in my belief that Floyd Mayweather will get more credit with each passing year. That is just the way it is sometimes. This doesn’t just happen with boxers but a whole variety of things.

While I would not go as far as to say that he is the best ever to lace up the gloves, he definitely deserves his place among history’s elite.

In memory of Roger Mayweather.