Mexican boxing legend Julio Cesar Chavez, like so many others, was born into poverty in his home country of Mexico on July 12th, 1962. With five sisters and four brothers, Chavez grew up thinking that the only way to try and put an end to his then current circumstances was to enter the fight game. This was encouraged by his older brothers who were involved with the sport. Julio’s amateur career was quite brief, and even though his final amateur record has not been fully established, it is widely thought that he turned professional after only having thirteen amateur bouts.

At the age of only seventeen years, that he did on February 5th, 1980. After racking up 42 wins over the course of the next four years he challenged for the vacant WBC super-featherweight title. After making various successful defenses against notable names like Roger Mayweather, Edwin Rosario and Rocky Lockridge he faced Meldrick Taylor in what would become a boxing classic. Taylor was outboxing the older man with combinations for the majority of the fight until a huge right hook to the head in the 12th round shook the American to his boots and was eventually floored. Referee Richard Steele called the fight off with just three seconds to go. That decision will live on in infamy. 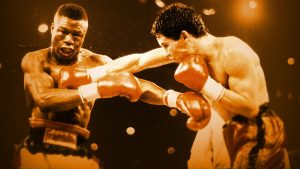 In 1993 another huge blockbuster against Pernell Whitaker resulted in more controversy when the fight was declared a draw after the consensus felt as if Whitaker had done enough to win. But it was on January 29th in 1994 that saw the then 89-0-1 light-welterweight suffer his first loss when Frankie Randall snatched the WBC crown, dropping Chavez with a straight right in the 11th round in the process. Four months later Julio would win a rematch between the pair when a clash of heads forced the bout to see who was ahead on the score cards after 8 rounds of action. Randall was deducted a point in the 8th round after a headbutt which became the deciding factor and Chavez got his revenge.

An old rival, Meldrick Taylor was Chavez’ fourth fight in 1994 but he was in sharp decline by this point, having been stopped by the likes of Terry Norris and Crisanto Espana for the WBA welterweight title. Julio handled business more easily this time, knocking Taylor out in the 8th round after a big left made him sit firmly on his behind.

Oscar De La Hoya, the up and coming prospect who won gold in the 1992 Summer Olympics, was due his shot at the WBC light-welterweight crown on June 7th, 1996. This was Chavez’ seventh defense. De La Hoya admitted that the champion was his idol and would go on to say that he is the best boxer to come out of Mexico in the years following this. Nevertheless sharp, accurate punches from the challenger opened up a severe cut around Chavez’ left eye which his team could do little to control. During the 4th round time was called so the ringside physician could examine the cut. Unfortunately it was deemed too severe for him to continue and a second loss in 99 fights would forever be etched on his record. It was De La Hoya’s 22nd contest. 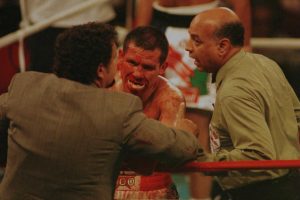 Chavez’ face was a bloody mess after facing Oscar De La Hoya for the first time.

From here on mixed Julio struggled to regain his old form. He would draw with Miguel Angel Gonzales in 1998 for the WBA 140lb title and suffer another defeat at the hands of De La Hoya in a high profile rematch. Three more losses to former IBO champion Willy Wise, Kostya Tszyu and finally Grover Wiley on September 17th, 2005 forced Chavez to seriously contemplate retirement on a permanent basis after already coming in and out of it during the previous few years. His fight with Grover was his 115th contest on file that, in the end, would statistically be recognised as 107 wins, 6 losses and 2 draws with 85 KO’s altogether.

If the quantifiable data does not impress you then we can alternatively look at what made Chavez so special. 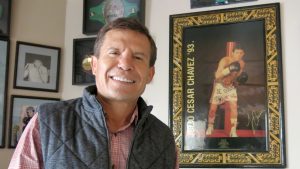 Julio Cesar Chavez at his home in Tijuana, Mexico.

First of all, the Sinaloa icon was equipped with a crushing left hook which he liked to use to the body often and then follow up with an equally hard left upstairs. His chin was solid and he never took a step back. Chavez was effective on the inside and on the outside but he has received criticism for facing below par opposition for many years until he eventually stepped up to prove his worth. After losing to Randall he had the desire to immediately reverse that, which he never hesitated to do. How boxers respond to defeat is a big part of what determines their legacy. If he had retired after the defeat to Randall then it is likely that Chavez would have been seen as some kind of pretender. Statistics only show half of the story. It’s when you dig deeper and discover the legitimacy, or lack thereof, that you find out the truth.

Mexico has contributed heavily to boxing’s rich history with the likes of Salvador Sanchez, Ricardo Lopez, Ruben Olivares and Jose Napoles among others.

But I certainly would not dismiss the notion if you were to claim to me that Julio Cesar Chavez was the best of them.