It has been almost twenty three years to the day when one of the biggest rematches in heavyweight boxing history ended in profound disappointment when Mike Tyson could not contain his rage, opting to bite a chunk of flesh from Evander Holyfield’s right ear in the 3rd round.

Tyson sustained a cut over his right eye in the previous round after Holyfield used his head as part of his offense, something which Tyson said he addressed to referee Mills Lane although no action was taken. And while the 3rd round was allowed to reach it’s natural conclusion, the fight effectively ended at that point when Tyson wanted to take his frustration out on Holyfield during the one minute rest period. Security eventually managed to contain Mike who was confirmed to have been disqualified when Lane had finally seen enough and instructed MC Jimmy Lennon Jr to read out such a result. 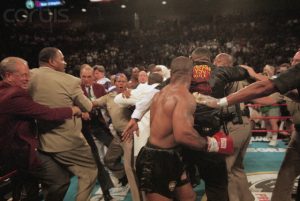 Chaos soon followed as gambling tables and chairs were turned over inside the MGM Grand hotel in Las Vegas and restaurants and bars had to be shut for almost two hours, the fight fans obviously taking their own feelings of resentment out on anything that crossed their paths. Order was eventually restored, but I do wonder from time to time how the rematch would have played out had both combatants stuck to the rules and fought a clean fight like they were supposed to.

The first two rounds looked as if things were going Holyfield’s way, with Mike being out-jabbed and hit with a number of clean power punches. But as the 3rd round began ‘Iron Mike’ started furiously, putting combinations together and piling on the pressure on his opponent who went on to eventually capture the heavyweight crown a record four times. A number of right hands landed on the temple of Evander during this round although they did not seem to particularly faze him at this point of the contest.

However I think it is possible that, had Tyson kept up that kind of momentum over the course of the next few rounds, we may have seen something interesting unfold. Nobody can question the durability of the ‘Real Deal’ so Mike would have had to employ the kind of attitude where he knew he would have been in for the long haul in order to see success. We have seen Holyfield run out of steam before in his fights with Riddick Bowe and James Toney so long as sustained pressure was put on him. 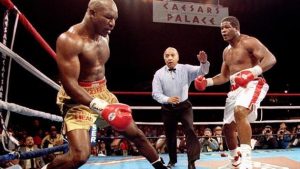 Evander Holyfield on the way to a knockout loss against Riddick Bowe in their third contest on 4th November, 1995. Would Mike Tyson achieved the same had he continued to put the pressure on?

Improving Mike’s chances would have been Lane giving stern warnings to Holyfield for his use of the head and even docking points should that behaviour have continued. Tyson had been cut in both the first and second fights due to headbutts and neither Mitch Halpern or Mills Lane called Holyfield for them.

I am not saying that a late Tyson knockout victory would have been the likeliest of outcomes in the return match. Objectively, he probably still would have been facing another loss sometime before the final bell sounded. But there is no doubt that Tyson would have always been in with a shot until he or Holyfield wilted and the fight containing a referee who was completely objective.

But as it stands, we will never know. Evander Holyfield didn’t just inflict a second loss on Mike Tyson during their first fight on November 9th, 1996. He also took his aura of invincibility.

Something he never could reclaim.

And sometimes that happens when a fighter is used to every other opponent trembling in fear in their corners.