Promoter Bob Arum has hinted that reigning WBC heavyweight champion, Tyson Fury could be upgraded to ‘Franchise Champion’ status sometime in the near future.

Speaking to SKY Sports Arum said, “We are addressing every weight category separately. The WBC is in the process of contacting every champion to assess their current status and plans.

“The WBC will be looking into each category and will review each case and rule taking into consideration the variables that have to do with each case.”

Fury became heavyweight champion for a second time when he knocked out Deontay Wilder in February for the WBC crown in the United States. Due to the unprecedented situation regarding the Covid-19 virus, it is unclear who he will definitely be facing next although there was a clause in the fight contract for a third match between Wilder and Fury. 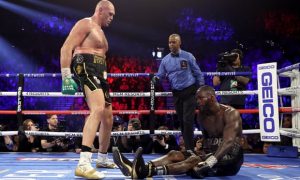 The ‘Franchise Champion’ status has already been derided by many people, with the likes of the now defunct Boxing Monthly magazine publication who ended up refusing to assign championship status to any of their ranked fighters in response. But the negative reaction aside, there simply is no need for Fury to accept the designation.

One of the “benefits” of being the ‘Franchise Champion’ is that a boxer is allowed to side step their mandatory defenses in order to pursue more meaningful fights. The weight class, at the moment, isn’t exactly brimming with top notch and exciting talent with the exception of perhaps Oleksandr Usyk. But Tyson Fury, judging by his approaches in boxing in the past, seems to want to always target the biggest fights out there. And with the right people involved, those fights can be made.

Eddie Hearn has expressed great interest in making an Anthony Joshua v Tyson Fury super-fight and has stated before that he is willing to work with any other promoter in order to make the biggest and the best fights that boxing can produce. If there is anybody that would serve to be stumbling blocks, it would be Bob Arum and Frank Warren. Both promoters have a reputation for wanting to make as much profit as possible without having to share it with anybody else. But to be fair to Frank, it appears to be Arum that has kick started this talk of Fury becoming a ‘Franchise Champion’ even if Warren has expressed contempt for Hearn before. 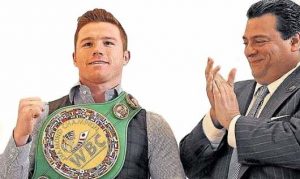 Saul Alvarez was the first boxer to be made the ‘Franchise Champion.’

Another reason why Fury will probably not need the ‘Franchise Champion’ nomination is that he can be very unpredictable in terms of what he wants to do from one day to the next. He has retired and then unretired numerous times already. And, if anything, the decisions he makes could actually prove why being a ‘Franchise Champion’ is what many people think of it as already – farcical.

If we look back to boxing’s recent history, say over the last ten or fifteen years or so, it wasn’t really mandatories that prevented the biggest matches from happening. It is the men with the money that have purposely held back on making them, instead deciding to let them simmer for as long as possible until they thought the time was right. This type of business tactic is still taking place today.

But the good news is, judging by Hearn’s words in an interview on Youtube, negotiations about a Joshua v Fury bout are rolling out nicely.

“There’s still work to do, but the good news is we have a deal in place in principle, in terms of the financial end of the deal. Mostly in all these major fights, that is the principal problem in getting the deal over the line. That’s been agreed,” Hearn said.

“There are obstacles to overcome — some broadcast issues, venue, of course, has to be decided as well, and the small matter of a couple of fights in between. Dillian Whyte’s mandatory (against Fury), as well, which we have to push for with the WBC. So still a long way to go, but everyone confident that we’re moving toward the biggest fight in boxing in 2021.”