I can’t think of another sport that movies love to use as a tool to tell their narratives like boxing. The explanation is rather an easy one. In our world, boxing can be about survival on a planet where money often dominates our lives. But it is also about pride, self worth and inner strength. Those are the things that boxing movies love to use as reasons to tell a story. And it is easy to see why because those factors are emotionally powerful.

Below is this author’s personal list of favourite films that encapsulate how potent the sport of boxing can be to tell a worthy story. 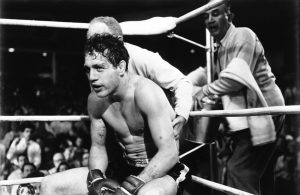 Paul Newman gives an electrifying performance as former middleweight champion Rocky Graziano in this boxing biopic. Charting the trials and tribulations of the boxing legend, Newman plays it honestly and his portrayal never tries to ask for the sympathy of the audience. Don’t let the age of this film put you off from giving it a try. Based on the book of the same name that was published two years prior, it is rather surprising just how blunt the events come across in a time when there was a plethora of films that wouldn’t dare to push the boundaries of what was acceptable to see on the big screen. 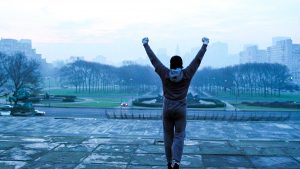 You just knew that this 1976 classic was going to end up here at some point. There is little doubt that Rocky is probably the most well known boxing film of all time in cinematic history. Sylvester Stallone was virtually penniless when he wrote the script for the film, even to the point where he had to sell his dog which he eventually bought back and put into the picture when cameras were rolling. Inspired by Chuck Wepner’s 1975 challenge to Muhammad Ali in a fight in which he managed to unexpectedly floor the champion, Stallone took that moment as inspiration for the Rocky character as somebody who would eventually go from being a nobody to somebody by the film’s conclusion.

Sylvester Stallone’s own life would, in a way, mirror the character’s quest for success after he became world famous when the movie was released and would go on to star in some of the biggest action films that cinema could ever produce. 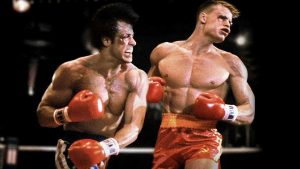 I’m not sure if this entry surprises anybody by being on here at all, but I have noticed that this is a particular sequel in the Rocky franchise that is a favourite of many, me included. By this point, the Rocky series was clearly asking how ridiculous it could become while still managing to make as much money as possible. And it appears that the fourth entry was the limit after the next sequel would come up with a different way to put Rocky in a vulnerable and life threatening situation.

There is plenty of 1980s charm in Rocky IV, which is basically an action revenge film, the type of plot device that was frequently contained in a number of combat and action movies throughout that decade. Almost absent is the emotional depth of the original, with the focus primarily on almost mindless fun.

It’s the type of flick that we all need every once in a while. 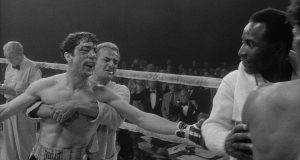 Personally, I see little point to this movie’s existence. A lot of films tend to reveal what their purpose is for their development but Raging Bull doesn’t seem to have one. Not too dissimilar to Somebody Up There Likes Me in terms of wanting to show the turbulence of a man’s life Raging Bull tries its hand at it and does that pretty well, all things considered. Robert De Niro won an Academy Award for his performance as Jake Lamotta and Joe Pesci’s life changed when he became one to watch over the coming years since Raging Bull was made.

The fight scenes are hardly realistic but perhaps that was the intention of director Martin Scorsese. They serve as metaphors for how life continuously can beat a person down but they also emphasise the importance of how our inner strength can keep us punching back and live for another day. 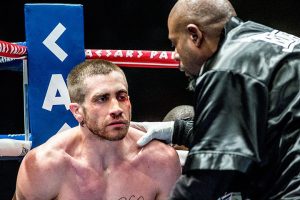 One of the better and recent films to base itself on the sport of boxing, Southpaw stars Jake Gyllenhaal as Billy Hope, a fighter who had it all but loses everything and everybody who he held dear to him. Starting at the bottom again, Hope tries everything he can to not only improve his reputation but to win back the heart of his daughter.

Southpaw is a grounded boxing film that is mainly focused on one man’s quest for redemption for his wrongdoings. The picture doesn’t beat around the bush and shows how the sport can brutally take its physical toll on a boxer, especially post fight. Those that prefer not to be reminded or be informed of the harsh realities of boxing should probably steer clear, however.