I have covered movies and songs that have largely been influenced by the most well known of combat sports. So it only makes sense to continue with that kind of theme by now discussing what were some of the best boxing video games to have hit our gaming consoles in a bygone era.

Sit back and travel back in time to revisit (if you were old enough!) a number of your once favourite boxing video games that hold a tremendous amount of nostalgic value for legions of us old school game players. 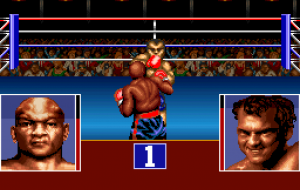 You might say that George Foreman’s KO Boxing was kind of a parody of the legend’s public image during the second half of his career. When you see him munching on cheeseburgers during the one minute rest periods you know the developers were not taking a very serious approach. But that is part of what makes this game work. Not everything needs to be serious, right?

The gameplay is quite addictive and the opponents were not overly difficult. Although KO Boxing doesn’t really have anything to elevate itself above any other boxing game of this time period it certainly wasn’t one of the worst, either. 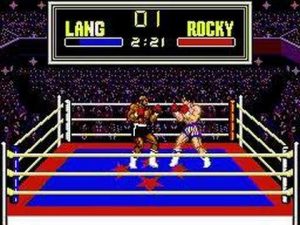 When it comes to this old school classic, variety isn’t a word you would use to describe how it is used. To be honest, pounding the same button over and over again is the thing here. Rocky The Game has also been called one of the worst games ever to hit the Master System.

But sue me, I have always rather enjoyed it. Its simplicity is what makes it appealing and it gets straight to the point from the moment you press any button on the main menu. The miniature training segments do not have an effect in the way you perform either. But providing you can reach completion of the game it does provide a charmingly short good time. 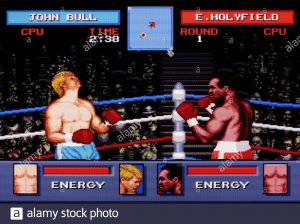 Widely considered to be the best boxing game to have ever hit the Mega Drive, Real Deal Boxing’s gaming engine was one of the best of its time. Using separate controls for most of the range of available punches, there was no training system per se although you could select certain power ups to continuously improve your attributes. Even Mr. Holyfield, himself, would chime in with his own comments regarding how well (or badly) you were progressing through the rankings.

Add to that were graphical injury effects which often placed you in danger of being stopped by the referee for taking too much punishment, this gem was as real as it got for its time. 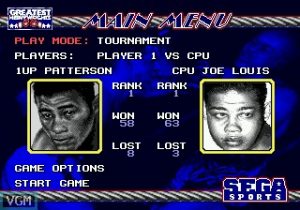 Taking the same game engine from Evander Holyfield’s Real Deal Boxing, Greatest Heavyweights was guilty for being too much like the former game that was released a few years earlier. However, there were graphical improvements in both sound and audio as well as the appeal of letting the player face off against some of their real life boxing heroes including Muhammad Ali and Jack Dempsey.

If you didn’t mind the similarity with Real Deal Boxing then Greatest Heavyweights was still a ball of fun. 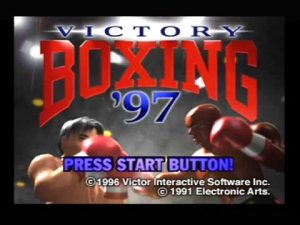 Victory Boxing was released during the later half of the 1990s and was one of Playstation’s first boxing video games to hit the market.

The polygon graphics were not much to shout about but the player did have full control of what he or she wanted to do in the squared circle against an opponent, whether that was to taunt or deliver a mean knockout blow. The music was annoyingly repetitive but muting the television sorted that issue out. Real statistics meant you was able to compile your own boxing record including listing any draws should you have fought to one. I got so good at this game that I wanted to see how many wins I could actually register and the limit appeared to be 99.

Still, the entertaining gameplay meant high replay value and that is always a good thing. 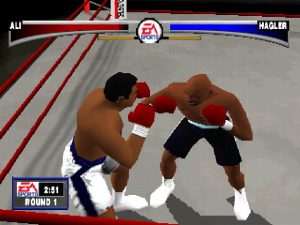 Knockout Kings 99 was reminiscent of Greatest Heavyweights in terms of its idea to allow us to square off against a selection of the sport’s legendary names. But a lack of originality didn’t stop me from finding this game to be one of the finest of the late 1990s.

The control mechanism was surprisingly limited but the game made up for that in other areas including a huge one punch that the player had to be wary of or they could very well have seen their butts on the canvas taking the referee’s count. Also present was fight commentary by some of the most famous boxing commentators as well as speech by then top referee, Mills Lane.