Russia’s Alexander Povetkin produced possibly one of the best uppercuts of the year to shatter Dillian Whyte’s hopes of a world title shot happening any time soon when he was able to stop the British contender in the 5th round. The Pay Per View bout was held in promoter Eddie Hearn’s head quarters without a crowd in attendance enforced by lockdown measures due to the Covid-19 pandemic.

It looked as if Whyte was going to have a relatively easy night when he floored Povetkin twice in the 4th round. He was also dominating the contest up until then, making his opponent look all of the 40 years that he is. However, things took a dramatic turn in the 5th when Povetkin saw an opening and swung a huge left uppercut that went on to land perfectly placed on the chin of Whyte, sending him on his back. Such was the force of the blow that he never made any attempt to get up and he was soon attended by medical professionals as a precaution.

Whyte was first installed as the mandatory challenger for the WBC crown in 2017 but he had been made to wait for his turn ever since. After Tyson Fury had delivered Deontay Wilder his first loss and snatched his WBC title it was looking as if a fight between him and Whyte was going to be on the horizon. However, Povetkin is now the new compulsory contender. Luckily for Dillian, a rematch clause was in the contract and he has stated that he has the intention of activating that as soon as possible. Hearn said a return bout could happen in either November or December. 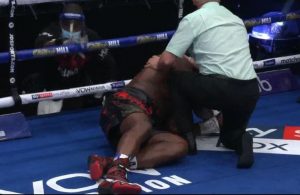 Dillian Whyte is attended to by the referee before paramedics after being hit with a big left uppercut by Alexander Povetkin.

So, has anything changed about my perception of the ability of Dillian Whyte as a boxer?

A couple of things.

It is not objective to start coming down hard on the guy, especially when all it took was one punch to end things. In the heavyweight division, everybody has a weak chin. It isn’t like how it is in the lower weight classes where those guys often need a volley of hits to get a knockout.

Before the Povetkin bout, I always had the impression that Dillian was the best out of a bad bunch of heavyweight combatants. That isn’t a huge compliment to him. He has a good jab as well as a heavy counter left hook. But, and as he showed last night, he has a habit of leaving himself wide open after swinging wildly. Whyte also tends to start blowing hard just before the midway point of his fights. And his lack of defence is glaring.

But those things that I pointed out above were evident before what happened just recently. 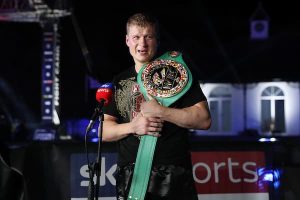 Alexander Povetkin after his victory over Dillian Whyte, holding the WBC Diamond belt.

I guess it is also possible that his punch resistance may now have diminished. Dillian has suffered two heavy knockout losses, the first being by Anthony Joshua in 2015. It is not a certainty that he will be less able to take a decent thud but that’s a question that may be answered before the end of the year.

If what happened against Alexander was due to a lack of focus then there may be something mentally that Whyte also needs to fix. We may see mostly the physical side of the sport. But it has been often said by experts that boxing is mostly mental. This makes sense since it is crucial to be in the right frame of mind to do combat. And we have seen it before when boxers have taken their foot off the gas due to whatever reason and then they found themselves taking the referee’s count. Lennox Lewis v Hasim Rahman I springs to mind.

As for Alexander Povetkin, if he is forced to do battle with Dillian again then at least he has the motivation of trying to prove that his victory was no fluke. Even if it kind of looked that way. And I’m sure he will want to cling on to that mandatory challenger position in order to eventually fight Tyson Fury for his portion of the championship.

2020 has now suddenly become the year to see what Dillian Whyte is really made of.

It’s now all over to him.