It has been three years since former two weight world champion, Timothy Bradley quit the ring after stating that he wanted to move on to other things since building a career littered with known names. Of those names, the man known as ‘Desert Storm,’ only ever lost to one particular opponent in Manny Pacquiao.

Due to a strict vegan diet, Bradley was also known for his well defined abdominal muscles. Conditioning was never an issue for him. Although trying to become a hot ticket seller was! The American unfortunately was never able to capture the public’s imagination. His boxing style was one where Bradley felt that he never really had to go to war, although he could certainly do that as he proved against Ruslan Provodnikov in 2013. But overall, he fought too conservatively, even if cunningly, for the blood thirsty fight fans. 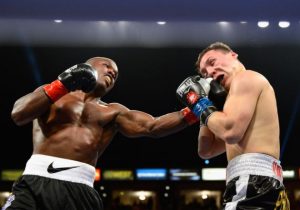 Timothy Bradley’s fight with Ruslan Provodnikov was a barn burner but it failed to generally boost Bradley’s stock.

Timothy’s ability to take a mean punch was evident, although his chin wasn’t exactly cast iron. He was put down by the likes of Provodnikov and Kendall Holt. He managed to battle back in those bouts and come away with a victory which showed how tough he was. Bradley would also use footwork effectively to create angles and maintain enough distance where he was hard to hit cleanly. But with only 13 knockouts in 33 total wins, Timothy was never a concussive hitter. It was a good thing then that he excelled in terms of having a good boxing brain to score points and routinely see the end of the 12th round.

However, fighters like Manny Pacquiao exposed Bradley’s weaknesses and the lack of ability to win over the elite level combatants. That isn’t to say that he never had any valuable wins. Juan Manuel Marquez, Brandon Rios, Kendall Holt, Devon Alexander, Jessie Vargas and Lamont Peterson all came up short and were very good boxers.

In regards to world titles, Tim captured the WBC and WBO belts in the light-welterweight and welterweight weight divisions. Boxing can prove from time to time to be a big motivator since the Californian had only $11 to his name before he fought and beat Junior Witter to win his first world title. He even went to the champion’s back yard of England to do the job! 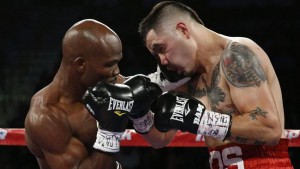 Brandon Rios was made to realise how good Bradley was.

Speaking of England, their former silver medallist Amir Khan was campaigning at the height of his career back then and he expressed his eagerness to take Tim on. The Brit’s enthusiasm was ignored when Bradley stated that it didn’t make sense to take on Khan for much less money than he was going to get for fighting Manny Pacquiao later on down the road. Unfortunately, Bradley v Khan never materialised. Amir, himself, went on to show the world that he couldn’t quite cut it at the elite level even though he tried his hardest to.

Timothy Bradley finally called it a day on August 6th, 2017. 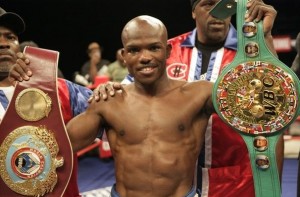 ‘Desert Storm’ posing with his belts.

In a final statement he said: “I hope to continue to allow boxing in my world through teaching, commentating and being a fan of a sport I love so dearly. And to you, the diehard fans, man, it’s been one heck of a ride.”

Unlike many fighters, Bradley got out of fighting on his own terms. At still only 37 years of age, he still has most of his life ahead of him. He may not have been the most exciting of ring warriors but I feel that he isn’t given enough praise. I am sure the fans of the “sweet science” give him the appropriate amount. But it is likely that the masses will sadly not.

And I think there is some injustice there.

Carlos Takam 39-5-1 (28) has emerged as the frontrunner to face WBC heavyweight champion Tyson Fury 30-0-1 (21) in London on December 5. Fury was expected to face Deontay Wilder for a third time in December but walked away from the fight when the …