There is little doubt that it has come to be expected that most fighters who are able to compete at the very top level in boxing are able to strongly withstand incoming fire from their opponents.

However, this isn’t always the case!

Sometimes somebody comes along, who has the talent to become a world champion, but they have to make adjustments in order to try and make up for their lack of punch resistance.

This article is going to discuss five combatants who always struggled with taking a punch, yet, were still able to be good enough to mix it with the world’s best. 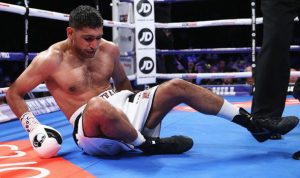 Bolton’s Amir Khan was visiting the canvas long before he ever campaigned for his first world title. I am referring to when he was still an amateur, before he won the silver medal in 2004. Craig Watson threw a left hand that made Khan’s legs shake and fold. Amir went on to win the fight and came away with a bloody nose.

In the professional game, you can take your pick.

At least the former IBF and WBA champion is never boring to watch! 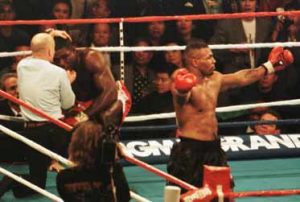 Britain’s own Frank Bruno had a big heart to go with his huge muscles. Scoring 38 KO’s in 40 victories, Bruno could hit! Unfortunately his lack of punch resistance at the top level meant that he had to persevere and work hard to win a world title, which he eventually did in 1995.

Bruno has been on the receiving end of defeat five times and has been knocked out in every one of them, all by fighters who were then current or future world champions. 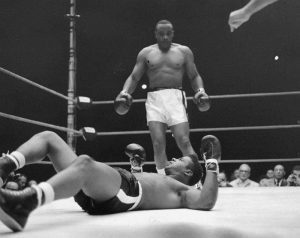 Now, to be fair Floyd Patterson may have been knocked out in five of his eight losses. But he was halted by Muhammad Ali twice and the ferocious Sonny Liston a couple of times, too. And there is no shame in that considering what we should know about those two guys.

But knockouts aside, Floyd was put down at least twenty times in his whole career. And that is while when he was setting records such as becoming the first boxer to reclaim the heavyweight crown! When Ukrainian Wladimir Klitschko was getting headaches the next morning after seeing knockout defeats to the fighters like Corrie Sanders and Lamon Brewster, he made the right call to change his training team and sought the help of well respected defensive trainer Emmanuel Steward.

Steward did an amazing job, however, as he was still learning the new tricks that the West Virginian was teaching him he was still struggling with hard hitters like Samuel Peter. It looked like Peter merely had to flick him and Wladimir would fall over.

Nevertheless, Peter would come up short on the score cards in that one.

There is a reason why Steward was asked to develop Wladimir’s jab and instructed him to hold whenever he got hurt. I’m sure even the man himself wouldn’t say otherwise. Bruce Seldon is now probably most famous for looking like he wanted out against Mike Tyson several seconds after rising, looking focused and then wobbling all over the place. But that debate aside, he unwillingly (well, that depends how you look at it) racked up seven knockout losses in a total of eight.

Names like Oliver McCall and Riddick Bowe made him a knockout statistic on their records, with the only boxer failing to do so being Tony Tubbs.